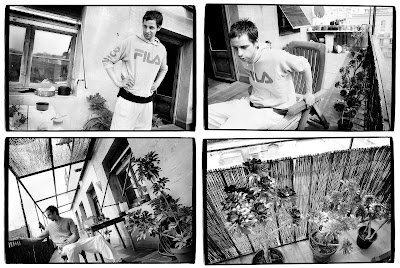 i used to live with his brother Florian.. and he came over for a visit and ended up staying with us for like half a year after which he eventually was sort of kicked back to Berlin. Long, very long story. And then at some point Florian followed that way and we eventually lost track of each other.
Felix could sometimes give you the impression of being dumb as a goddamn rock but he was a very smart guy, his way. He used to have horrible nightmares nearly every night but was such a sweet person to have around, like if he wouldnt let that shit turn him down. He was definately living somewhere out of this world, dont ask me where..
Last thing i heard about him was that he was about to marry old friend and former german tv star 'Supermommy' (just in case u cant picture her, think of a HUGE version of Oprah Winfrey)
crazy huh..
I wonder whats been of their lifes and stuff all along these years. Folks are some of the most genuine people i have ever met in my entire life. Fuck. I miss them.
Posted by Alive.n.kicking Photography at 5:08 PM

Ladies and gentlemen of fine taste